Why? We have a group of international artists coming to stay for three months to collaborate with each other and Indonesian artists toward creation of a new pan-Asian performance. Very exciting!

We’ll post pix here of the works underway so please check back over the next couple of weeks to see how we’re doing. It’s a kind of performance in itself.

The lead pic is of the forthcoming window in the ‘writer’s warung’, a room with double bed, big window looking onto part of the garden and, of course, a writing desk.

The pic below is of the hard-working team from Lis’s village in Central Java, who made the window hole, pictured pulling out an old door to make way for the new.

And now, next morning, some more progress.

Two young gentlemen from the nearby Toko Madura, a shop specialising in secondhand timber, arrived earlier this morning to measure the holes (and forthcoming holes) and receive the designs for the doors and windows. Now we wait a few days for them to complete their tasks.

In the meantime, Team Java are installing guttering along the terrace because when it rains in Bogor, it pours, and the water from the roof descends in the shape of an attractive wave that breaks upon the ground and splashes up and over the low wall of the terrace, causing some limitation of comfortable use.

And thanks to the daily afternoon rain, it has been tested and works!

Wondering why there were no gutters already installed? One theory is that modern buildings adopted Western building technologies, such as concrete, but the builders also kept traditional features, such as not installing guttering, which wasn’t perhaps used in the past because of a lack of suitable material and wide eaves that kept the walls dry; the teak walls typically resisting any water splatter. The extra expense of modern guttering would not have been attractive, either. And the need to store water in tanks or ponds was hardly necessary in the tropical climate of the past. Longer and more extreme dry seasons, as we experienced this year, might begin to change this approach.

Meanwhile, holes have been knocked in the Pool and Middle warung rooms.

And today, on time, the window frame for the Writer’s room has arrived.

Job done. Now waiting for the Toko Madura gentlemen to come with the glass.

In the meantime, the door frame has been properly installed…

And the large window and door frames in the Pool room, likewise….

The door and window frame for the Middle room, which is in one piece, has just arrived because it had to be returned owing to the gentlemen omitting to include one of the window frames…

By the way, don’t worry, the child isn’t working, he’s playing. His father is the one doing the work.

While waiting for the frames to arrive, a marvellous desk and chair were finished and installed in the study.

The blue slogan reads in translation as ‘Your words are your quality’ (or words to that effect; translation is not this writer’s strong point). The red reads as ‘The way to change is to start with yourself’. The third reads something like, ‘Life is an artwork without an eraser’. And the plain reads something like, ‘Stop hoping for what isn’t certain’. Firm advice from the heart of Java.

And today, the Middle room door and windows’ frame has been installed.

And the timber for the new bed frames arrived.

The glass and frames for the side windows and doors in the Pool and Middle rooms also arrived and have been installed.

In the meantime, Pak Rojak has been making another chair.

While all the sawing, hammering and sanding has been underway, we finally framed some photos of theatre people and hung them on the wall of the Inner Terrace. It is the beginning of the Sanggar O Wall of Fame 🙂

The arrangement is a bit wobbly but so was the hanger, it being New Year’s Day. 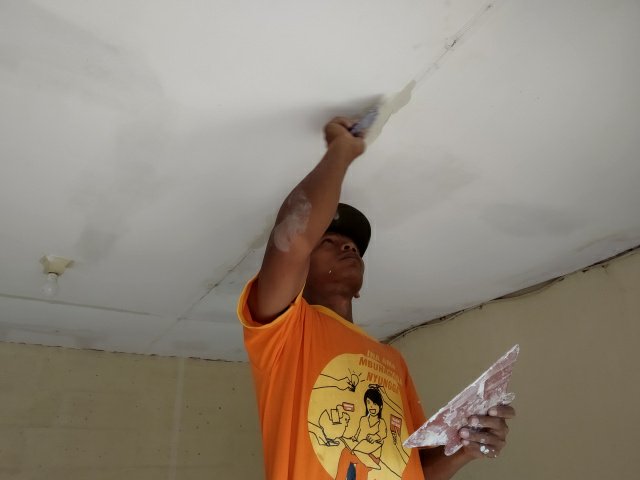 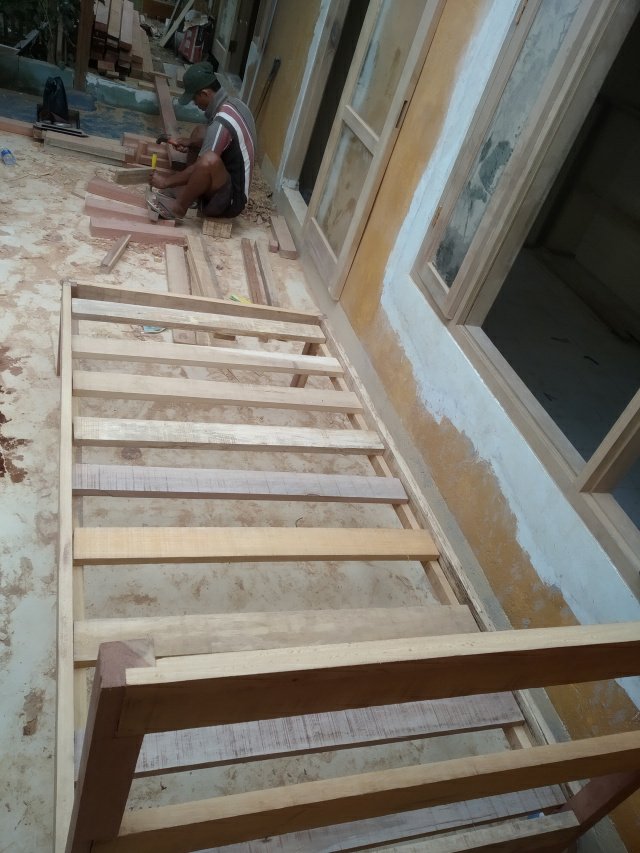 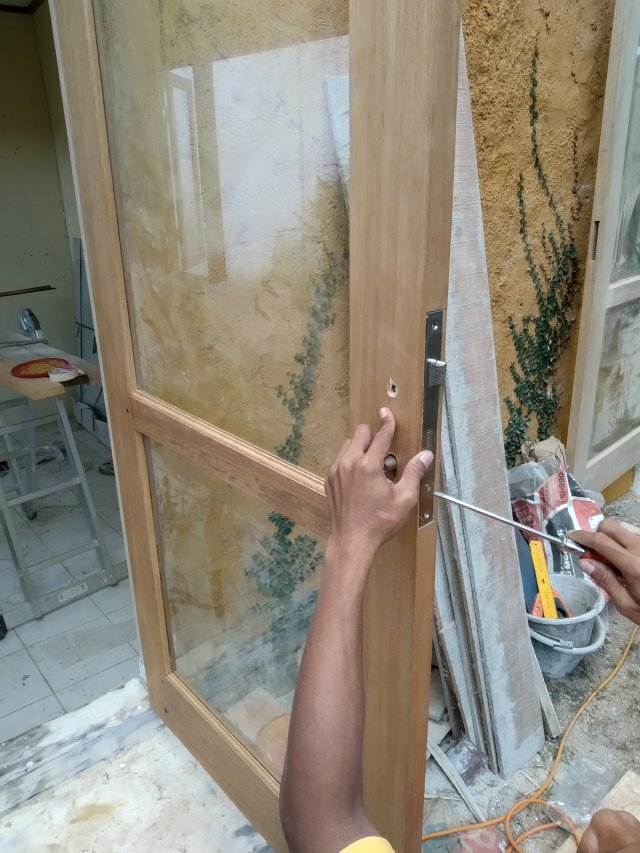 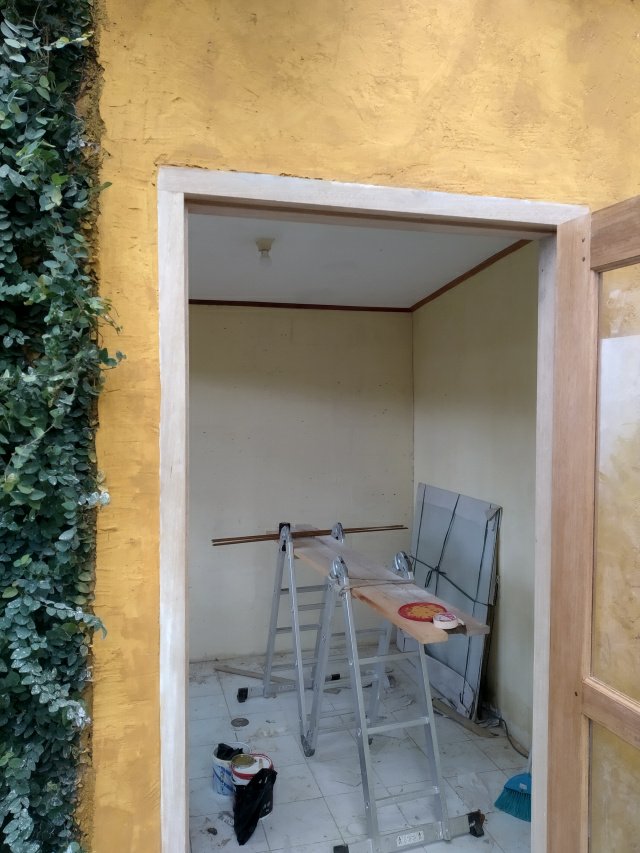 AND NOW… All decorated, all done..

(Photos of the Writer’s room and the Pool room coming soon. Currently they’re occupied, which is the subject a forthcoming story)

The inner and outer terraces 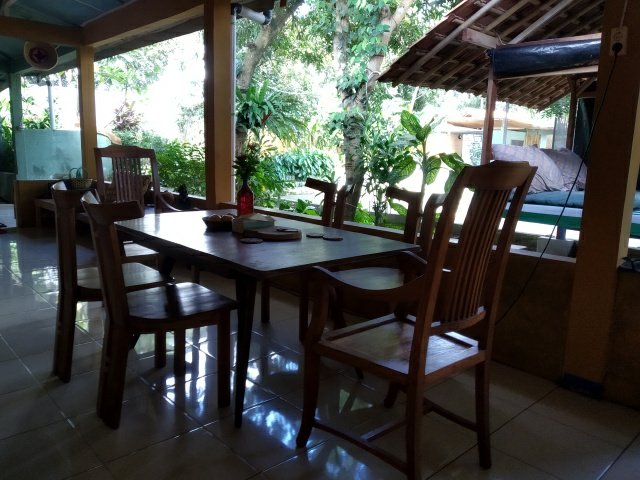 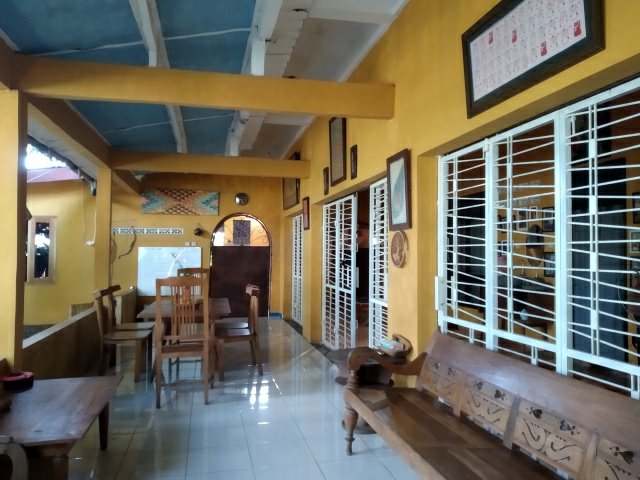 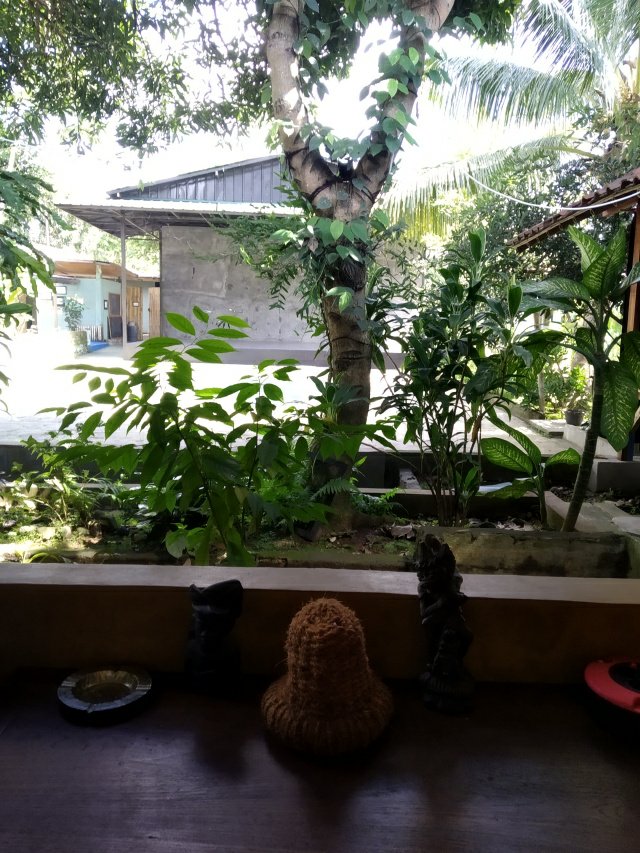 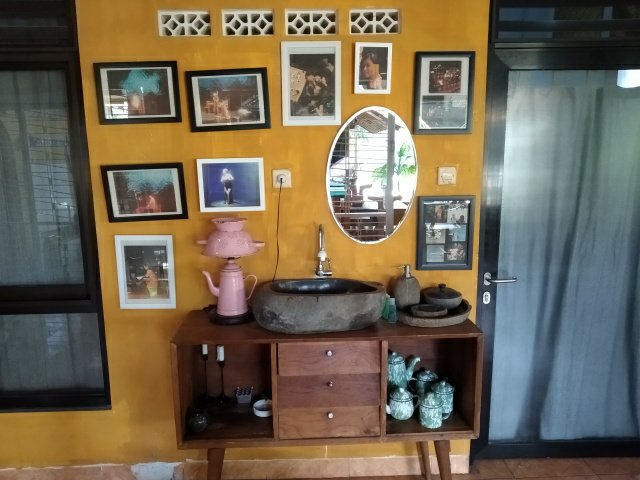 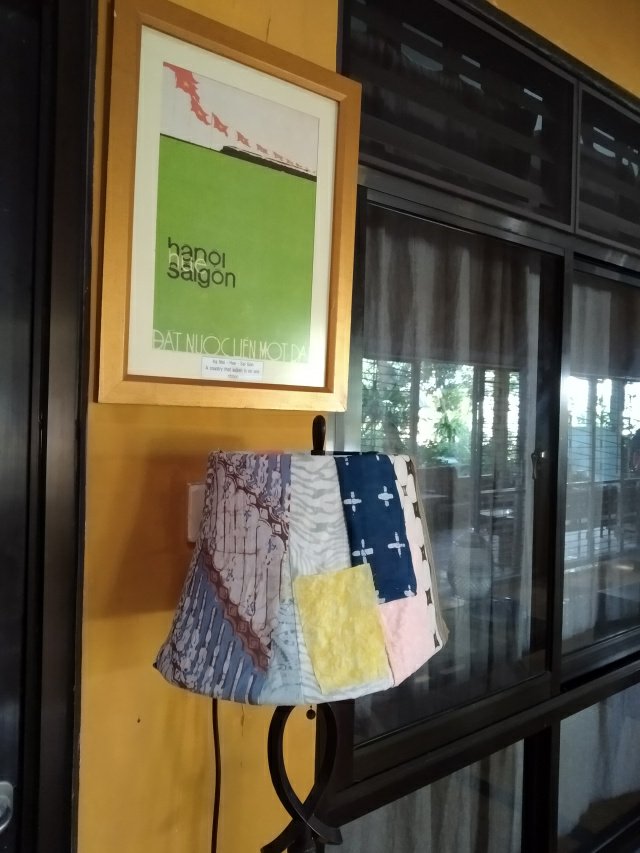 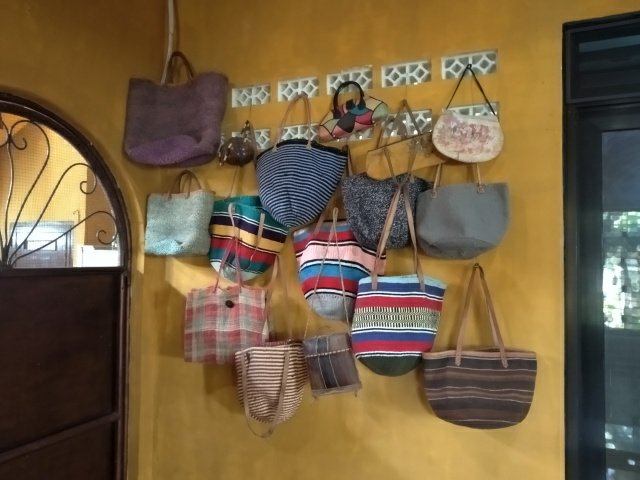 THE GARDEN AND POOL 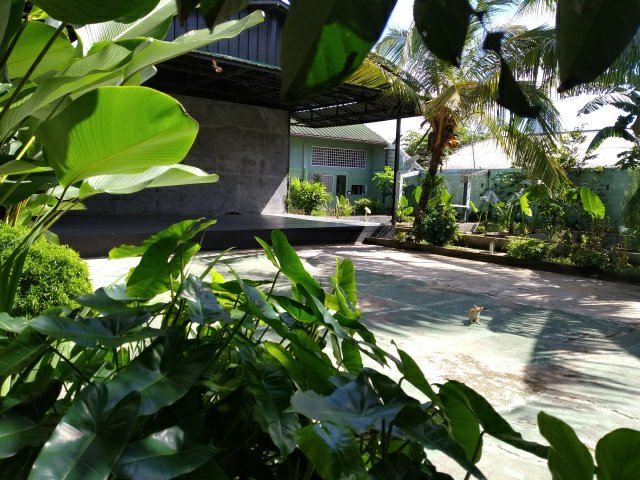 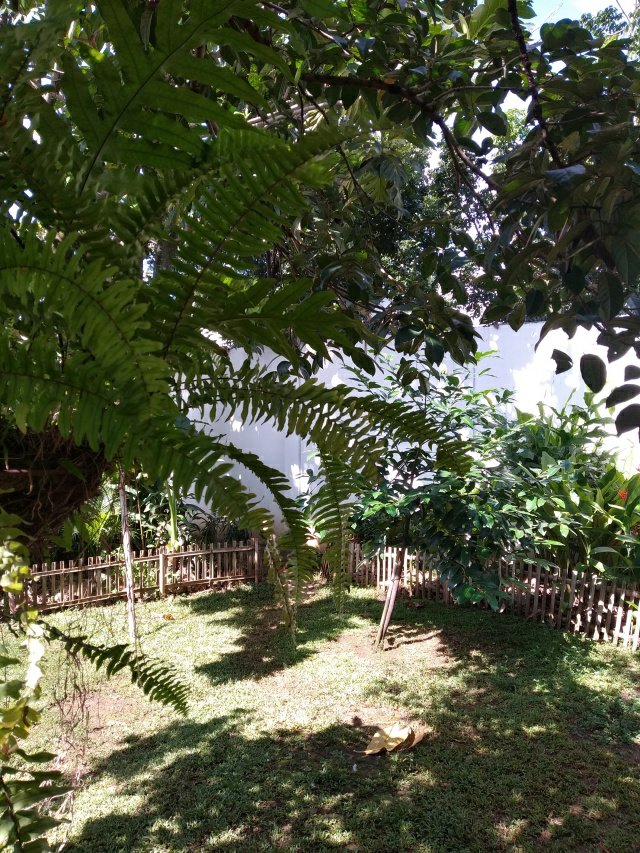 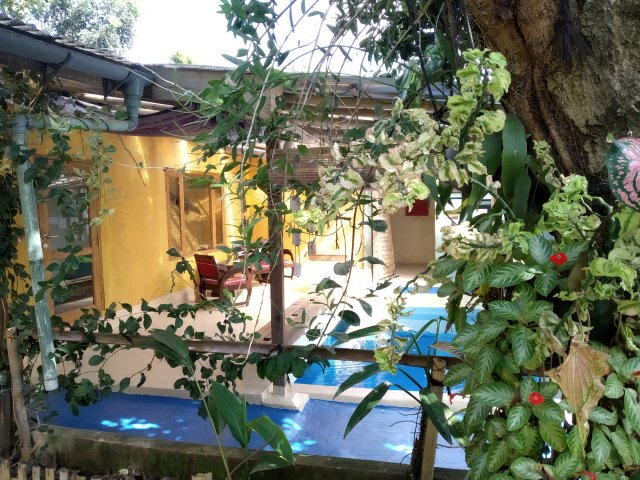 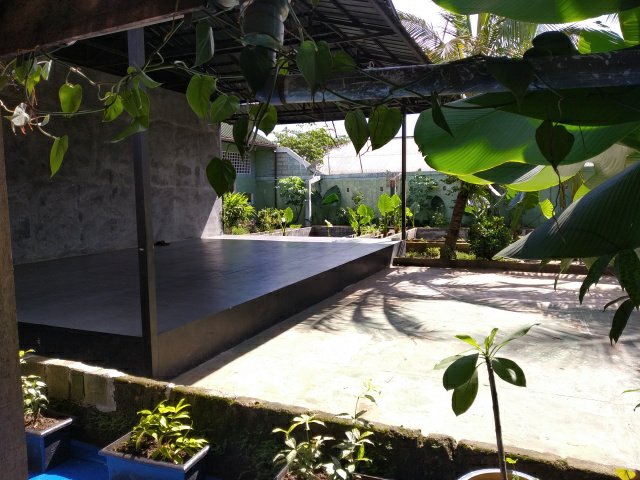 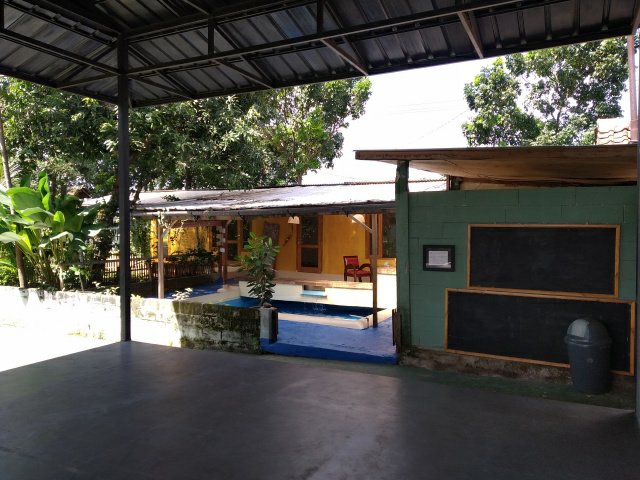 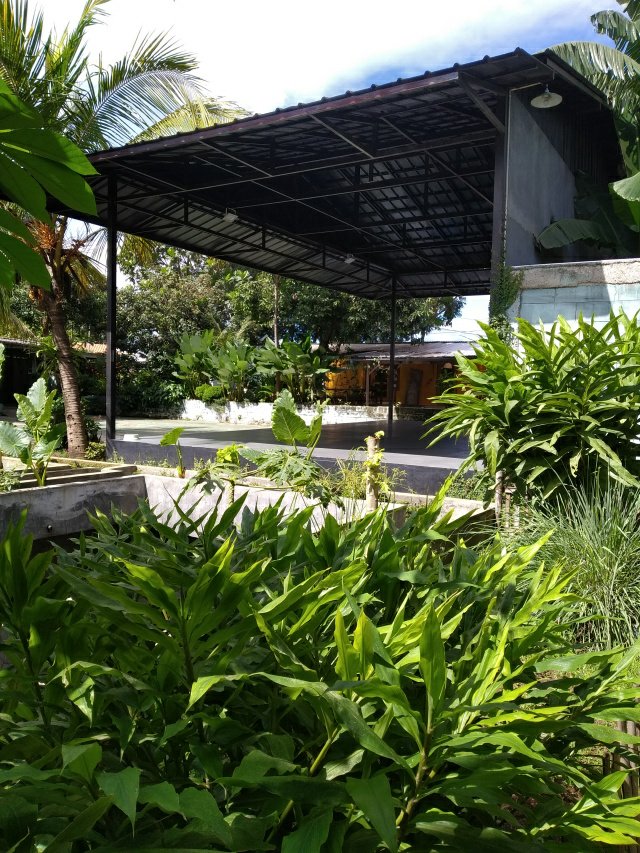 AND SOME TOILETS DEPLOYED AS ART GALLERIES 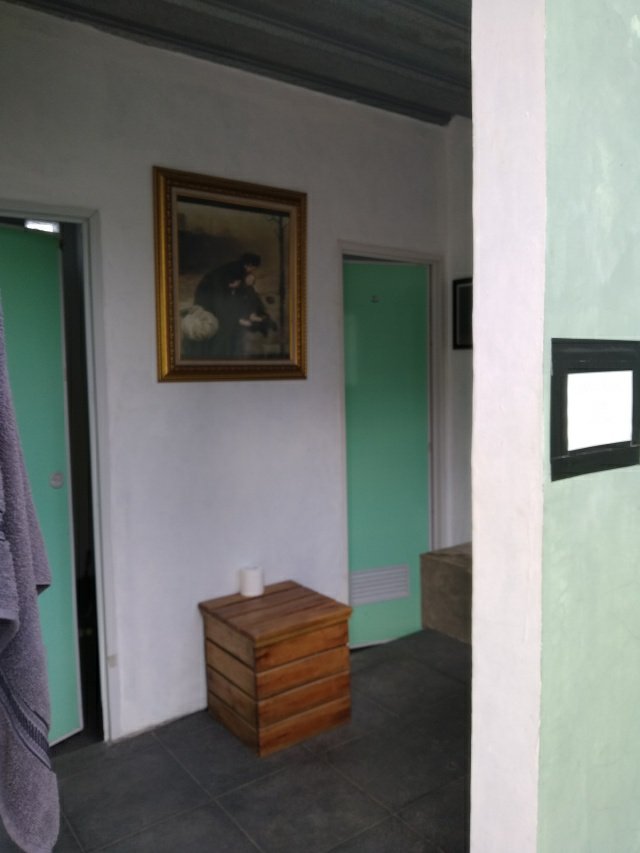